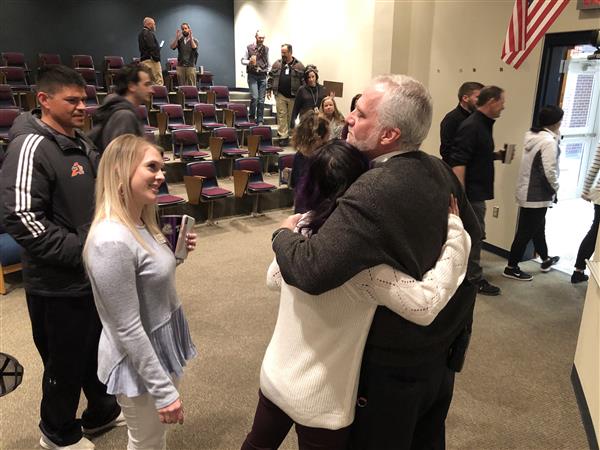 Aledo High School Principal Dan Peterson announced his retirement Thursday after 35 years in public education as a principal and teacher.

Peterson has served in Aledo ISD the past 12 years as the principal of Aledo Middle School and Aledo High School. He has successfully led both campuses and carried forward the high standards of academic and extracurricular excellence in Aledo ISD, while building a successful student culture and atmosphere at AHS.

“I am blessed to end my 35-year career in education at the best district and community in Texas,” Peterson said. “I am forever grateful for the opportunity to support our incredible students and watch them excel in so many areas each year.”

After serving 17 years in Crowley ISD, Peterson joined Aledo ISD as the Aledo Middle School Principal in 2008. After two years at AMS, he moved to Aledo High School and has served the campus for the past 10 years. Peterson leads an AHS campus of 1,330 students that annually performs as one of the most successful in the state in UIL academics, fine arts and athletic competitions. During the 2018-2019 school year, Aledo High School had a 99 percent graduation rate and produced more than $24 million in senior scholarships.

“We are grateful for Mr. Peterson’s 12 years of service to our Aledo ISD community and his significant positive impact on our students and staff,” said Dr. Susan K. Bohn, Aledo ISD Superintendent. “We are excited for Mr. Peterson’s next stage in life and to take the opportunity to celebrate his outstanding career and accomplishments. However, we will certainly miss him being such a valuable member of our team.”

Peterson, a native of Nebraska, began his career in Lewisville ISD in 1985 as an Industrial Arts Teacher. He later joined Crowley ISD and served as a teacher, assistant principal, principal and central office administrator before coming to Aledo ISD.

Peterson will continue to serve the AHS campus for the remainder of the 2019-2020 school year, and will lead the graduation ceremony for the Class of 2020 on May 31.