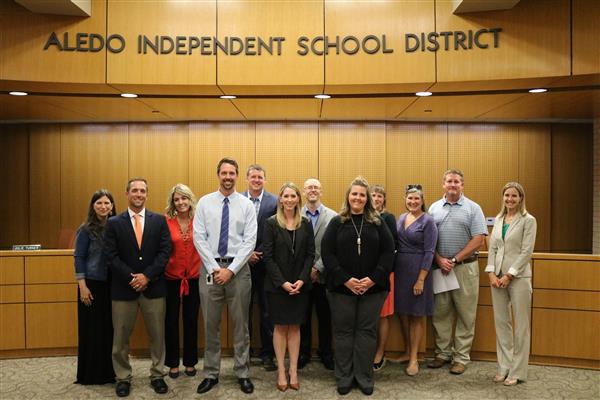 The Board of Trustees approved the hiring of the new campus leaders at McAnally Intermediate with the additions of Principal Dennis Hearn and Assistant Principal Karen May.

“We are very excited to have Mr. Hearn leading the McAnally campus,” said Aledo ISD Superintendent Dr. Susan K. Bohn.  “He is a student-focused instructional leader who will continue the exceptional work of the staff at McAnally in growing excellence and achievement in our students.”

May will join Hearn at McAnally Intermediate after serving in Burleson ISD as a Collaborative Teacher. She began her public education teaching career in Burleson ISD and served for five years before moving to Fort Worth ISD. May was an 8th grade Language Arts teacher for five years and rejoined Burleson ISD in 2016 and taught at Hughes Middle School. She has a Master of Curriculum & Instruction from the University of Texas at Arlington.

Jake Bean returns to Aledo ISD after he was approved as the new McCall Elementary Assistant Principal. Bean served from 2015-2018 as an Assistant Principal at Aledo Middle School. He also served as a teacher in Fort Worth ISD for seven years and has a Master of Science in Educational Leadership and Policy Studies from the University of Texas at Arlington.

Hammond has taught second grade at Stuard Elementary since 2016. She has also taught fourth and fifth grade in Kennedale ISD and Frisco ISD, respectively. Hammond has a Master of Science in Educational Administration from the University of Texas at Arlington.

“Our new campus administrators are tremendous additions to the Bearcat leadership team,” Bohn said. “We are thrilled to have them and look forward to them continuing the commitment to excellence and building exceptional experiences for our children and staff now and in the future.”