The Aledo ISD Board of Trustees were honored to recognize the January 2023 Bearcats of Character for the character trait Self Control at the regular meeting in January. In tandem with launching the character education program Positivity Project - or P2 - Trustees have been able to recognize the good character on display by the great students across all of Aledo ISD since last year as Bearcats of Character.

The Bearcats of Character strength Trustees recognized in January was self-control. P2 says that SELF-CONTROL is the act of managing behavior in a way that positively influences goal attainment and living up to standards. Experts say that self-control is an important trait as it allows individuals to delay the short-term gain in pursuit of a greater, long-term success. It gives people the power to lead healthy lives,study for an exam, or practice a musical instrument. Some psychologists have likened self-control to a muscle that gets stronger the more it’s used.

Congratulations to the following students: 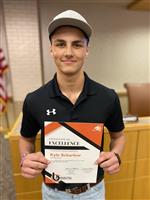 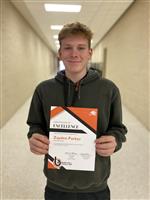 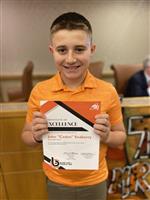 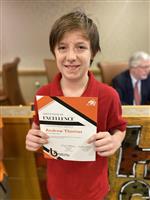 Aledo High School: Kyle Scharlow, 11th grade
Kyle has shown growth and strength this year. He has exhibited maturity and self control and accepts responsibility for his actions. Kyle independently seeks out guidance and support when needed.

Aledo Learning Center: Laurel Williams, 11th grade
Laurel comes to class and immediately gets to work. She does not get distracted by the surrounding students or her cell phone. She has the self-control to focus on her goal of finishing her classes and resists the urge to give up. Laurel has shown that she will be successful due to the her ability to exhibit self-control.

Daniel Ninth Grade: Zayden Parker, 9th grade
I recommend Zayden Parker for the Bearcat of Character for the trait of self-control. In my time of coaching Zayden, I have grown to know that he is an intense competitor. With this personality, Zayden has always demonstrated a tremendous amount of self-control while on the basketball floor and also within his every day life. Although Zayden wants to win at everything he does, he consistently maintains composure, focus, and treats everyone with the respect they deserve.

Aledo Middle School: Caden Seaberry, 6th grade
Caden is a smart, caring young man with a big, sensitive heart, who exercises his ability to control his emotions and to stay calm in stressful situations. He has developed this essential characteristic through hard work and by facing every single challenge that comes his way, including lots of times when he didn’t really want to.

In class, Caden has made incredible gains, but it was a long, slow, cognitively and emotionally demanding process. Facing a task that is overwhelmingly difficult and that is sure to expose all of one’s weaknesses would make anyone feel vulnerable. Those are exactly the kinds of tasks that Caden faced each day in class. There were plenty of times when he was discouraged and probably would have liked to quit and just walk away, but Caden stayed at it. Sometimes he got pretty quiet, but over time he found his voice and he began to speak up about those feelings and those impulses. And as he spoke, he began to master those thoughts and behaviors that had kept him down and made him feel small and incapable. Caden learned self-awareness and self-control and he practiced it day after day until he began to conquer his fears, and his challenges, and some pretty big goals!

Caden uses his power for good; he will speak up to help resolve an argument between friends, calming emotions without taking sides, and is kind enough to make sure both parties feel seen and heard.

McAnally Middle School: Andrew Thomas, 7th grade
Andrew Thomas has been selected by his teacher, Mrs. Alison, as McAnally Middle School's Bearcat Character Champion! Mrs. Alison shares that Andrew has grown tremendously in the year that I have known him; especially in the area of self-control. He is pleasant, motivated and comes to class ready to learn. He is engaged, asks great questions and is making great gains in learning as a result. He recently shared that he was thinking about his life one day and the struggles he was having. He decided that he didn't want his life to be like that any more, so he thought about what kind of life he did want and decided to start being the kind of guy that did better in order to have a happier life. It was such a powerful testament to his character and the power of self-awareness. I'd say he is doing a terrific job becoming that guy that he wants to be! 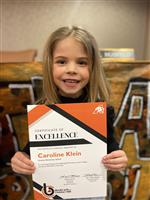 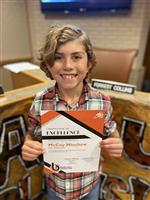 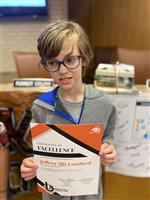 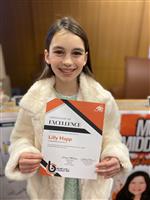 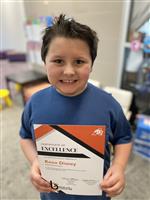 Annetta Elementary School: Caroline Klein, Kindergarten
Mrs. Smith, Caroline’s Kindergarten teacher, says about Caroline, “ Caroline is an extremely dedicated student who uses her self-control to learn to read, working in her center. I notice her self-control especially when we are doing whole group on the rug while doing Really Great Read and Heggerty. I know her self-control plays extremely important in her gymnastic accomplishments. For these reasons (and a lot more) I have nominated Caroline for demonstrating self-control.

Coder Elementary School: McCoy Minchew, 3rd grade
McCoy Minchew is a model student. He is always attentive and respectful. There are plenty of opportunities to just go crazy in the music classroom, and he shows so much self-control by not giving in. I can always count on McCoy to be ready to participate fully in whatever we are singing or playing, and I know that he will be on-task! It is a joy to have McCoy in the classroom. ~Stacy Andrews, Music Teacher

When I was asked to pick a student that possesses self-control, McCoy was the first student I thought of. McCoy is always following directions, and in control of his actions. He is always the first person to do the task that is asked of him, and do it with a smile on his face. ~Allie Sooter, 3rd Grade Teacher

McCall Elementary School: JJ Lunsford, 5th grade
Mrs. Harbuck, JJ's Science techer says "Jeffrey, known as JJ at McCall, shows self control everyday by quietly working hard to do his work, despite temptations to join in side conversations and such. He always works hard to stay calm and makes an amazing effort to communicate his emotions to others which can be a challenge for any 5th grader. He uses self-control with kindness every day."

His ELAR teacher, Mrs. Hilton, says "JJ is a remarkable kiddo who approaches learning, communicating, and life uniquely…and always with self control. He is a young man whose mind is filled with amazing thoughts, but his articulation of his thoughts and feelings is incredibly insightful. This new year we chose words or phrases to revolve our New Year Resolutions around. We explained the whys that served as motivation, and then listed action steps to help us achieve those goals. While JJ’s word wasn’t “self control,” his thoughtful explanations about his resolution had everything to do with self control. I was simply inspired, as I perceive him as a student who thinks reflectively before he acts or says anything in class, and yet his goal showed his desire to grow that same personal strength in his home life, where many of our kiddos struggle the most in practicing discipline and self control. JJ is truly one of a kind, and I am just thrilled for him to receive this recognition."

Stuard Elementary School: Brooks Hundley, 1st grade
Students can be great at many things, but what makes Brooks exceptional is his ability to combine greatness with self-control. He is able to recognize the needs around him and think before acting. His controlled, helpful, and thoughtful decisions are the makings of a fantastic leader. - Mrs. Getz, 1st Grade Teacher

Vandagriff Elementary School: Lilly Happ, 5th Grade
Lilly displays self control through every situation, even difficult ones, with grace and a positive attitude. She displays great leadership and being a role model to her peers by making good choices and helping others to make good choices. Lilly is a wonderful student and friend to everyone. She sets a positive example for her classmates by being self-disciplined. Lilly is a natural leader in the classroom and in Student Council. She brightens any room she walks into! Awesome job Lilly.

Walsh Elementary School: Knox Disney, 1st Grade
From Knox's teacher, Mrs. Tarvin: Knox shows self-control on a daily basis and I am so proud of the growth he has made this school year. He works on his school work and works towards achieving personal goals. When he is feeling frustrated/upset/or sad he is able to use self-control and advocate for himself to let me know what he needs. During unstructured time (lunch, recess, and specials) Knox uses self-control by keeping his hands and feet to himself and staying in his own personal bubble space while being respectful of others personal space. I am so proud of him!